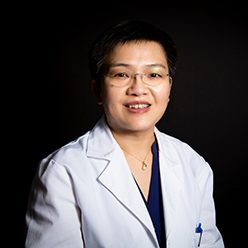 Dr. Xiaoying Zhu is currently the Lead Clinician at the Myopia Control Clinic at the University Eye Center of the SUNY, College of Optometry. She is also leading both clinical and basic research for myopia control, and teaching some didactic courses.

Dr. Zhu completed her Ophthalmology residency training in China, after which she started myopia research by investigating the morphological changes in form-deprivation myopia using the chick model. Since herpost-doctoral training at the City College of City University of New York, she has been studying the signaling molecules regulating emmetropization and temporal integration of defocus, in search of potential methods for preventing and/or controlling myopia progression in school-aged children. Dr. Zhu also studied some intrinsic, non-visual factors involved in emmetropization and eye growth during her PhD in Australia. Hoping to apply her knowledge and clinical and research experience on patients for myopia control, she completed an OD from the New England College of Optometry. She is currently a full-time faculty member at SUNY College of Optometry, and serves as Principle Investigator for multiple clinical trials for myopia control. She mentors Master students, and reviews manuscripts for multiple peer-reviewed journals. She is currently the Section Chair at the Annual Meeting Program Committee for The Association for Research inVision and Ophthalmology (ARVO). She is also serving on the Curriculum Committee and Academic Advising Committee at the college. She just received the National Alliance for Eye and Vision Research Annual Emerging Vision Scientist Award in 2020.

Dr. Zhu's principal research interests encompass emmetropization, visual development and myopia. Specifically, she has been studying the signaling molecules regulating emmetropization and temporal integration of defocus, in search of potential methods for preventing and/or treating myopia in school-aged children, because myopia is a major public health concern and is speculated to affect half of the population by 2050. It is important to understand the molecular pathways involved in eye growth modulation and myopia development, and her research has shown that glucagon and insulin are potential signaling molecules that act to reduce and enhance myopia development, respectively. In addition, Dr. Zhu also discovered that the retina does not integrate defocus in a linear fashion. In fact, the signals regulating eye growth rise quickly and become saturated during the exposure, and decay slowly between exposure. Also, the signals regulating hyperopic development are very long lasting, which may explains why myopic defocus can be used to reduce myopia progression, Dr. Zhu is currently collaborating with Drs. Regan Ashby and Pauline Kang in Australia to further investigate the retina’s response to defocus.